Birds on a Wire Slot

Birds on a Wire is a fun filled game that is offered by Thunderkick. With this game, players will enjoy the action of a five reel slot game that features 17 different paylines. Instead of icons appearing in rows on reels, they are birds that land on wires that go across the screen. The presentation of the game is quite attractive and the bird theme will appeal to many different slot fans online.

The appealing thing about this game is that it uses Dropping Symbols. When a winning combination is created, new symbols will drop from the top of the screen to replace the symbols that make the initial combination. This will continue for as long as new wins are created, so there are multiple opportunities to collect payouts from just one spin. For every win on a dropped symbol, the multiplier will increase, offering larger payouts for consecutive wins.

This great Thunderkick video slot may not offer a huge paying jackpot, but there are some nice rewards to be collected. There is a top payout of 1,000 coins and players can win more when they trigger the free spin round, which is the main bonus in the game.

As one would gather from the title of the game, this video slot is all based on Birds. Players will see seven different bird icons that will appear on the wires and these are all different colors. In addition to the bird icons, there are also wilds and scatters that are used. The wild is a pear-shaped black bird and he can appear in any positon to take the place of standard game icons. Five of these on a payline will award the base game jackpot.

The game also has a scatter icon, which is the carboard box with eyes. This scatter is not a paying symbol, but will be needed to trigger the free spin round in the game.

Thunderkick has created the symbols in this slot to be bold and appealing. As players spin, the birds will land on the wires and any winning combination will instantly be added to the balance in the game.

Like many other video slots that are presented online, Birds on a Wire can be enjoyed as a free game initially. This is a great way for new players to become familiar with the layout and the paylines that are used as well as to learn about the different bonus features. With the free game, all of the game features will be active.

Once players have become comfortable with the game and wish to start collecting payouts, they can begin to place real money wagers at any time. This is a simple process and bets start at just $0.10 per spin. The bet amounts are altered by clicking on the Chip icon, where players can select bet amounts that range all the way to $100 per spin. As soon as bets are selected, players will simply spin and watch the icons appear on the wires, creating some great combinations and triggering exciting game features.

All wins will be paid from left to right on the screen and only the highest winning combination will be awarded. With Birds in a Wire, players will also be able to make use of the auto play feature where they can select how many spins to play at a set bet amount. This feature can be enabled or disabled at any time and manual control of the game can be resumed.

Available Payouts in Birds on a Wire Slot

With this game, the base game payouts are in the lower side since players can create multiple wins in a single spin. The ability to use the Dropping Symbols to create more wins will offer more chances to boost the payouts and make up for the lower paying combinations that are offered. Also, every consecutive win will receive a multiplier up to 5x, so the overall win amounts can be pretty impressive. During the bonus game, those multipliers will be increased by 4, so players will collect payouts that have multipliers of 4x to 20x the normal amount.

In regards to the standard game icons, the black bird is the lowest paying icon, offering $0.10 for three on a payline o a $1 bet. The same payout is offered for three red birds, but is increased to $0.20 for orange birds. The light blue bird offers a $0.40 payout and the green bird presents $0.50 for three icons. The higher paying birds are the pink bird, offering $0.70 and the brown bird, which pays $1 for three icons. Unfortunately, the wild icon is not a multiplier, so it will only help to create standard winning combinations when used.

Birds on a Wire is a high variance slot game, so players can expect a mix of low and high win amounts, though the game will not offer frequent larger payouts. 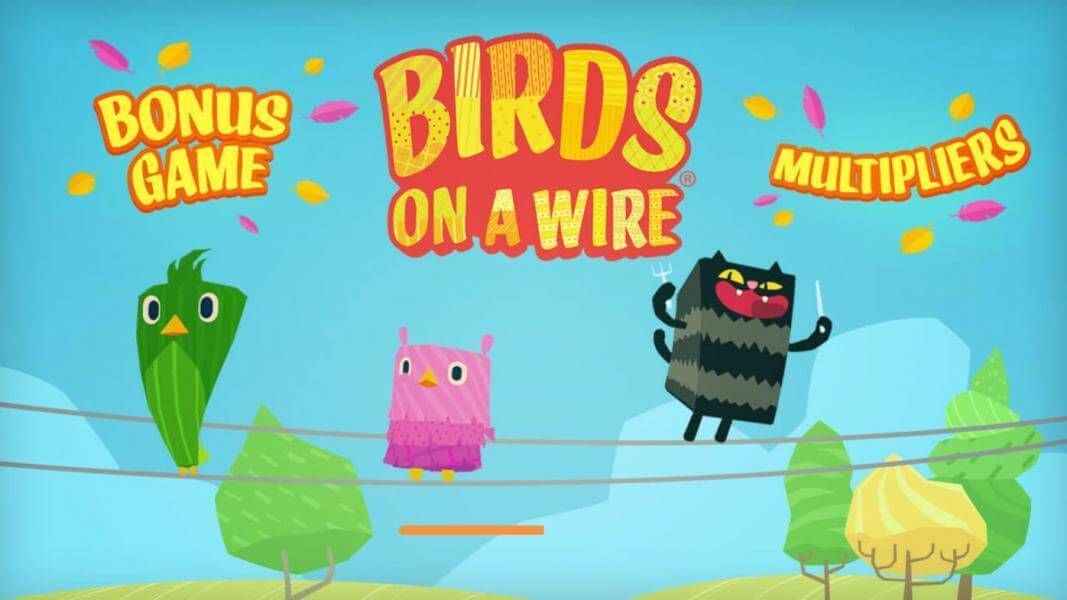 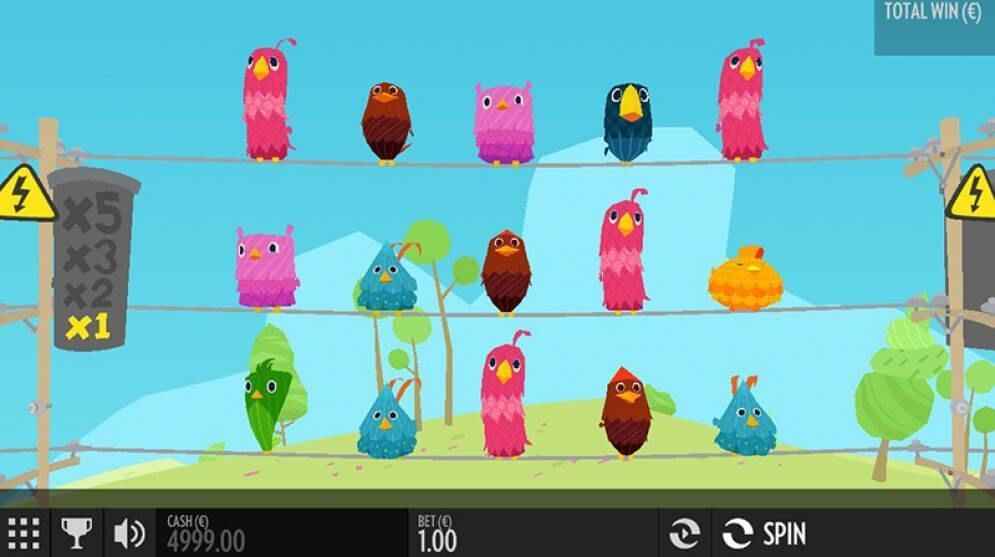 When it comes to bonus features, Birds on a Wire surely excels. The game may first appear to be a basic video slot, but after a few spins, players will find this game to not only be quite entertaining, but also very lucrative. The base payouts are on the lower side as mentioned, but with the added game features, players stand the chance to win much more than depicted on the pay table.

As discussed, the game uses Dropping Symbol, which is one of the great features offered. This allows multiple wins to be collected from just one spin, so players will pay less to win more. Since consecutive wins benefit from a multiplier, the wins that are collected can be pretty decent overall, with payouts being as high as 20x the normal amount in the free spin bonus round.

Aside from the basic features of multipliers, dropping symbols and wild symbols, the game does have a main bonus round, which is a free spin round. This can be triggered when three or more scatters appear in any position on the wires in a base game spin. When the bonus round is first triggered, players will receive 10 free spins. Should more bonus icons appear during these free spins, 2 additional spins are added for every bonus icon that appears. There is the chance to get as many as 34 spins in a single bonus round, so there are amazing chances to win. Aside from the free spins offering great opportunities, the payouts are increased by 4x the normal amount for every win that is generated in the free spin round.

The game does not offer any second screen bonus, so the highest payouts can be expected from the free spin round when it is triggered. There is also no gamble feature offered with Birds on a Wire. While the game does only offer one main bonus round, the chance to earn 34 spins is a great opportunity to grab some stellar wins. Those that are looking for a video slot that is packed with bonus features may not be pleased with this title, but it is a unique game for casual players who are looking for something entertaining and offering decent payouts. 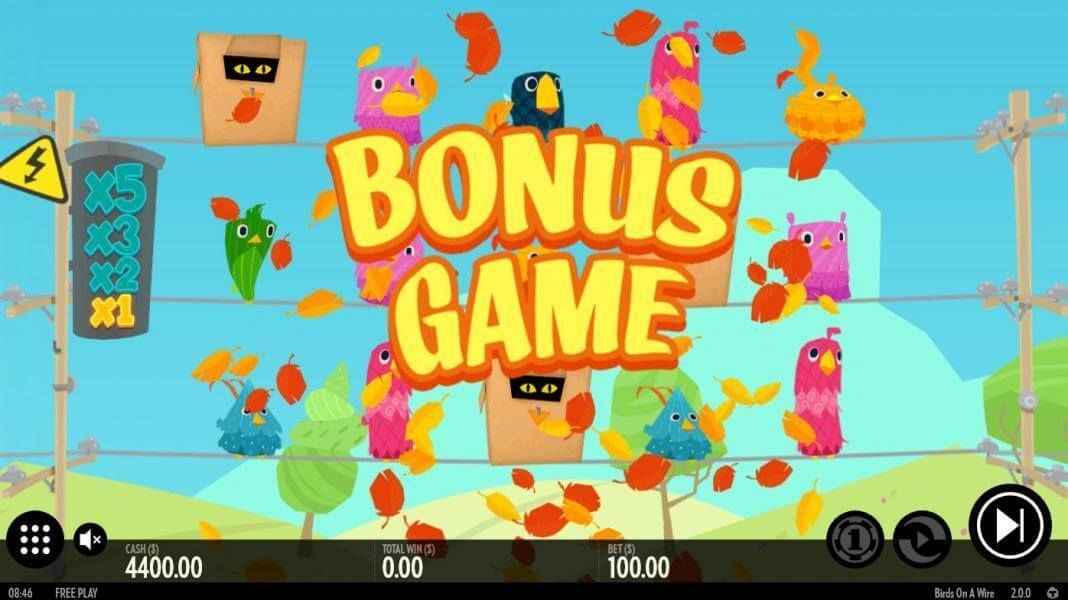 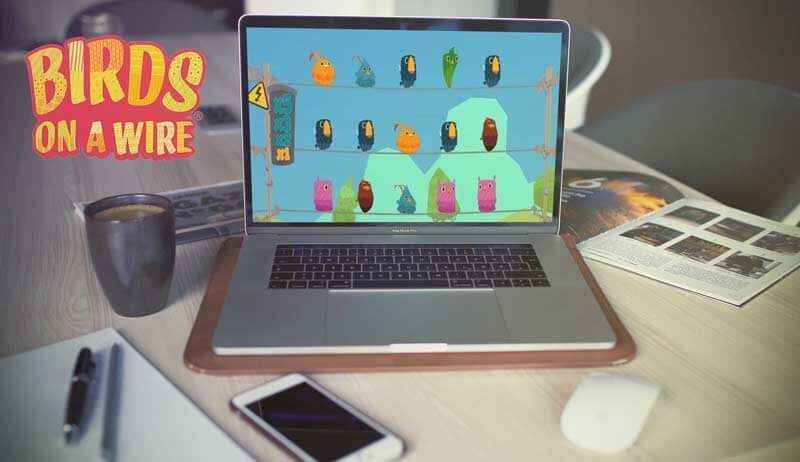 Thunderkick has created a unique game with Birds on a Wire and with an attractive theme and unusual layout. The game has become a huge hit for many online gamblers. The game is packed with some great features that will surely increase the overall win amounts and players will benefit from the ability to preview the game in a free play version before they start to wager any cash. The game does not present any progressive jackpot, but the bae game payouts and the rewards from bonus features will offer many ways to collect some handsome returns on wagers that are placed.

The game supports a great variety of betting options, making it accessible to low, mid and high rollers. With Birds on a Wire, there is endless excitement to enjoy and while the game is not the most visually appealing of all online slots, it is pretty entertaining. Overall, Thunderkick has done a great job with the design and presentation of this video slot and it can be enjoyed on desktops as well as mobile devices.